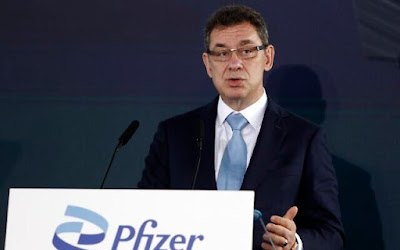 Pfizer CEO Albert Bourla said on Monday that while the “most likely scenario” is that the coronavirus will circulate for many years, he believes the current wave of infections will be the last to require restrictions.

Bourla gave an interview to the French medium BFM. TV to commemorate the announcement of an investment package by the pharmaceutical company in France. Bourla also touted the vaccines’ effectiveness and safety, saying  he believed people would still need booster shots. “It’s important that people get Pfizer’s three-dose regimen. coronavirus vaccine and will likely  require yearly booster shots, although the immunocompromised may need them every four months,” Bourla said.

“Children need to be vaccinated  to protect them. Its effectiveness in children is very, very, very good. Bourla also said  the company’s anti-COVID pill, Paxlovid, is “changing everything” as a new way to fight serious illnesses. Pfizer said in December that its Paxlovid pill had reduced hospitalizations and deaths by nearly 90 percent in vulnerable people.

In the interview, Bourla said the company was working on a plan that would invest 520 million euros ($593.7 million)  in France over the next five years, including a partnership with French company Novasep to develop an anti-inflammatory treatment -COVID pills.

France, like many other countries, is facing a record number of infections caused by the highly contagious Omicron variant. France’s parliament passed legislation on Sunday barring unvaccinated people from all restaurants, sports stadiums and other venues, the centerpiece of the government’s effort to protect hospitals. in the middle of the wave.

The government of French President Emmanuel Macron is hoping the step will be enough to limit the number of patients filling up strained hospitals nationwide without resorting to a new lockdown.

More than 76% of French ICU beds are occupied by virus patients, most of them unvaccinated, and some 200 people with the virus are dying every day. Like many countries, France is in the grip of the Omicron variant, recording more than 2,800 positive cases per 100,000 people over the past week.

Written by
This news first appeared on https://techncruncher.blogspot.com/2022/01/pfizer-ceo-virus-will-be-here-for-years.html under the title “Pfizer CEO: Virus will be here for years but this may be last wave with restrictions”. Bolchha Nepal is not responsible or affiliated towards the opinion expressed in this news article.

A visit to the human factory

Crypto is winning and Bitcoin diehards are furious about it

Hustler at the end of the world

What is Blockchain: Everything You Need to Know (2022)

ProWritingAid VS Grammarly: Which Grammar Checker is Better in (2022) ?

Sellfy Review 2022: How Good Is This Ecommerce Platform?

Erik ten Hag due in Manchester on Monday to bed in...