Depleted Scotland hold out against Ukraine for Nations League promotion

ECB developing proposal to host Tests between India and Pakistan

Worcester suspended and put into administration after missing deadline

‘It’s officially over’: Tyson Fury claims planned fight with Anthony Joshua is off 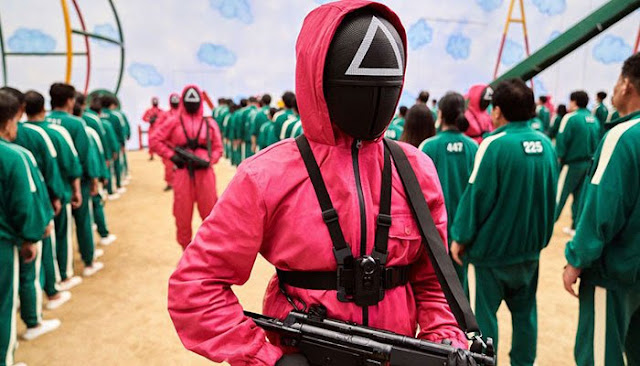 While Squid Game has become Netflix’s latest hit, it has sparked worry over kids potentially replicating the survival game.

A primary school in England issued a letter to parents expressing concern that children that have watched the brutal show are pretending to shoot other children in the playground as a way of re-enacting the show.

The letter states: “Dear Parents/Carers, It has come to our attention that a number of our children are watching Squid Game on Netflix.

“We have noticed an increased number of children starting to play their own versions of this game in the playground – which in turn is causing conflict within friendship groups.

“Children who are watching this are being exposed to graphic realistic scenes of violence and sadly children are acting out this behaviours in the playground which will not be TOLERATED.

“I would like to make you aware that this programme is rated a 15 for a reason.

“IT IS NOT APPROPRIATE FOR PRIMARY SCHOOL AGED CHILDREN. Any child who mimics or demonstrates these behaviours, parents will be called upon and sanctions applied. Please be aware of the dangers of this TV programme for your children and reinforce positive behaviours.

“Also please explicitly share that pretending to shoot one another is not appropriate – nor acceptable. Please support us in keeping your children safe,” the letter concluded.

Written by
This news first appeared on https://techncruncher.blogspot.com/2021/10/school-warns-parents-of-allowing.html under the title “

“. Bolchha Nepal is not responsible or affiliated towards the opinion expressed in this news article.

Asian America learns how to hit back

The SpaceX fans who uprooted their lives and moved to Starbase

The Humiliating History of the TSA

Depleted Scotland hold out against Ukraine for Nations League promotion